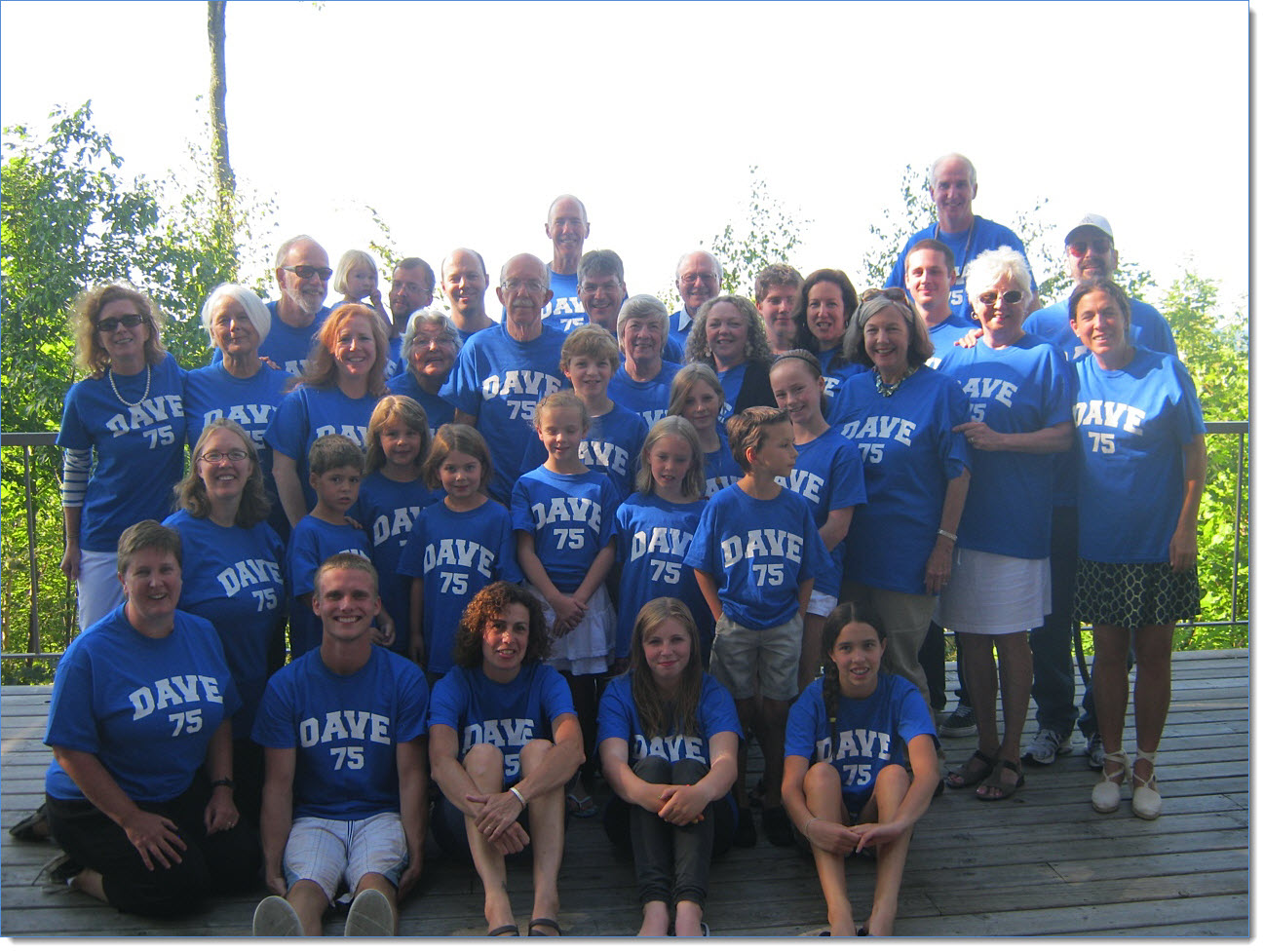 We're so glad that you could join us for four days of nostalgia, friendship, recreation, and fun-and to learn a bit about the history of our families.

Here is a list of Ream relatives. The list focuses on the progeny of five siblings/cousins who are now the oldest generation: Holly, Jack, Dave, Nancy, and Chris. The list does not include older generation first cousins who are not in attendance at DAVE 75 (John Duncan Biggs and Andy Biggs), nor does it include spouses of the "blood" relatives (the list simply got too crowded to include everything!).

The names of relatives-blood and otherwise-who are in attendance at Egg Harbor for the next few days are noted in bold face. The list's purpose is to provide some basic background data about each other for the 40 attendees at DAVE 75.

There are a couple of exceptions to the blood relative rule-the Saxe family and Jack Rose. See below.

Holly Noble (aka Alice, or Cuz) is the daughter of Walter Hahn and Portia Biggs. She and Mark Noble (now deceased) had two daughters Jennifer Noble-Wootton and Tracey McFadden. Cuz travels a lot, but does hang a hat occasionally in Tiburon, California. Jenny and Mike Wootton have two children-Carley Wootton and Kesha Wootton. They spend time on Long Island, Mexico, Wisconsin Dells, and other exotic places. Tracey and Bill McFadden live in rural Vermont with their two teen-age daughters-Kelsey and Hannah.

Jackson Ream, a retired banker, is the eldest son of Joseph Ream (aka the "Old Man") and Anita Biggs. He and Joan Ream live in the Dallas area. Jack has two older sons Bill Ream and John Ream, while Jack and Joan Ream have one son-Darren Ream, a Major in the U. S. Army. Darren is married to Lisa Ream, and they have two children Andrew Ream and Emily Ream. They live in Boise, Idaho.

John Ream is married to Marybeth, and they have two children-teenagers Holly (recent high school grad) and Sean. John's brother Bill has three children Spencer, Casey, and Avi. Bill is married to Donna Skipworth Ream. John and family live in New Jersey, while Bill is in the Cincinnati area.

Stephen Ream was married to Mary Jo Ream. Both are now deceased. Their son, Stuart Ream, is married to Suzanne, and has two sons, Stephen (his grandfather's namesake) and Kevin. Stephen recently married Kelly Scypinski. Stuart's sister, Patty Wright, is married to Greg Wright; they have two college-age sons, Grant and Gage, and live in New Jersey.

Davidson Ream has two children Michael Ream and Caitlin Cowan and a devoted Partner in lovely Jane Baker. Michael lives in Des Moines, Iowa with his spouse, Judy Walden, and young daughter Sofia Ream. When not organizing family reunions, Michael is a freelance writer and edtor; Judy is on the History faculty at Simpson College in Indianola, Iowa. Caitlin and Michael Cowan are librarians in Minneapolis. They are the devoted parents of Tabitha Cowan and Susanna Cowan.

Jane Baker has a daughter, Beth Negronida, and a son, John Negronida. Beth is married to computer expert Charlie Saxe; their two young children are Lindsey Saxe and Eric Saxe. Because they live in Skokie, the next town directly west of Evanston, Dave and Jane socialize a lot with the Saxe family. The Saxes are an exception to the blood relative rule; they are included because of their many years of closeness to Dave.

Nancy Cassandra Ream Rose is the only daughter of the Old Man and Anita Biggs. Nancy has two daughters Casey McGrath and Molly McGrath and is married to her constant companion, Jack Rose. Casey and Keith Giarman have one daughter Cecilia (aka "Cece") Giarman, while Molly has Miranda Lis and Amelia Lis. Most of Nancy's progeny live in the San Francisco area, but she and Jack favor Reno, Nevada; they travel all over the world.

Palo Alto-based Christopher Ream is the youngest child of the Old Man and Anita Biggs. He and Anne Ream are both lawyers. They have two children-Jason Ream and Anita Pollert. Jason is married to Megan Ream, and they live in Austin, Texas with their two young children, Hollister and Jessica. Anita and Bill Pollert live in New Jersey with their daughter Chloe Pollert. A "family tree" accompanies this listing of Ream relatives. The tree is actually a series of little boxes with family names. Find your box and learn how you fit into the tree.

John Ream has created a Ream family webpage, which has much more detail than that offered here. Kudos to John!! You can access the webpage at http://www.johnream.com/history.htm.

The Ream family-and the Biggses-have an exceptionally rich heritage, dating back at least to the17th century. Our ancestors came from (what is now) Germany and the British Isles, worked hard to establish themselves in America, and contributed a lot to the course of American History. We who are currently alive have benefitted from our ancestors' dedication. In return, we should learn a bit of the family history and be able to pass it on to future generations. A good starting point would be John Ream's webpage.